A belated second installment to the book review of “Garden Anywhere” by Alys Fowler. After further review of the book while on vacation this past week, I have determined it very generally presents an urban and chic set of instructions for gardening.

In the first real chapter, “From The Ground Up,”various steps to getting started in gardening are touched upon. A key question posed to the reader asks, “Where are you going to garden?” Fowler goes into many details and options on the subject, even giving the reader tips on how to choose a good space for the task. What I find interesting is the question and how it can be drawn to the story of OTRHomegrown .

In 2009 ORTHomegrown was stared as a community garden on Walnut Street.


The site was owned by the City of Cincinnati and was part of a new Pilot Gardening Program through a new sustainability commitment of some sort by the city. Our group came together to design, build, plant, and then maintain a “sustainable” example for the pilot program. Our initial intentions had been to create something which would be a cornerstone for the community five to ten years down the road. Halfway through that first year, a major issue developed. The city had sold the land we were gardening on. Within a year a new apartment building was to be built. All of our work towards “sustainability” was for nothing. We as a group were forced to come together and have a legitimate conversation about the question posed above, “Where (are we) going to garden?”. 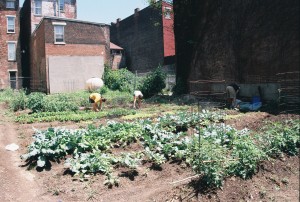 You may know the story from there. OTRHomegrown has relocated to another city owned site on Pleasant Street.


At the old Walnut Street site, no building has been built or even started yet (a year on).