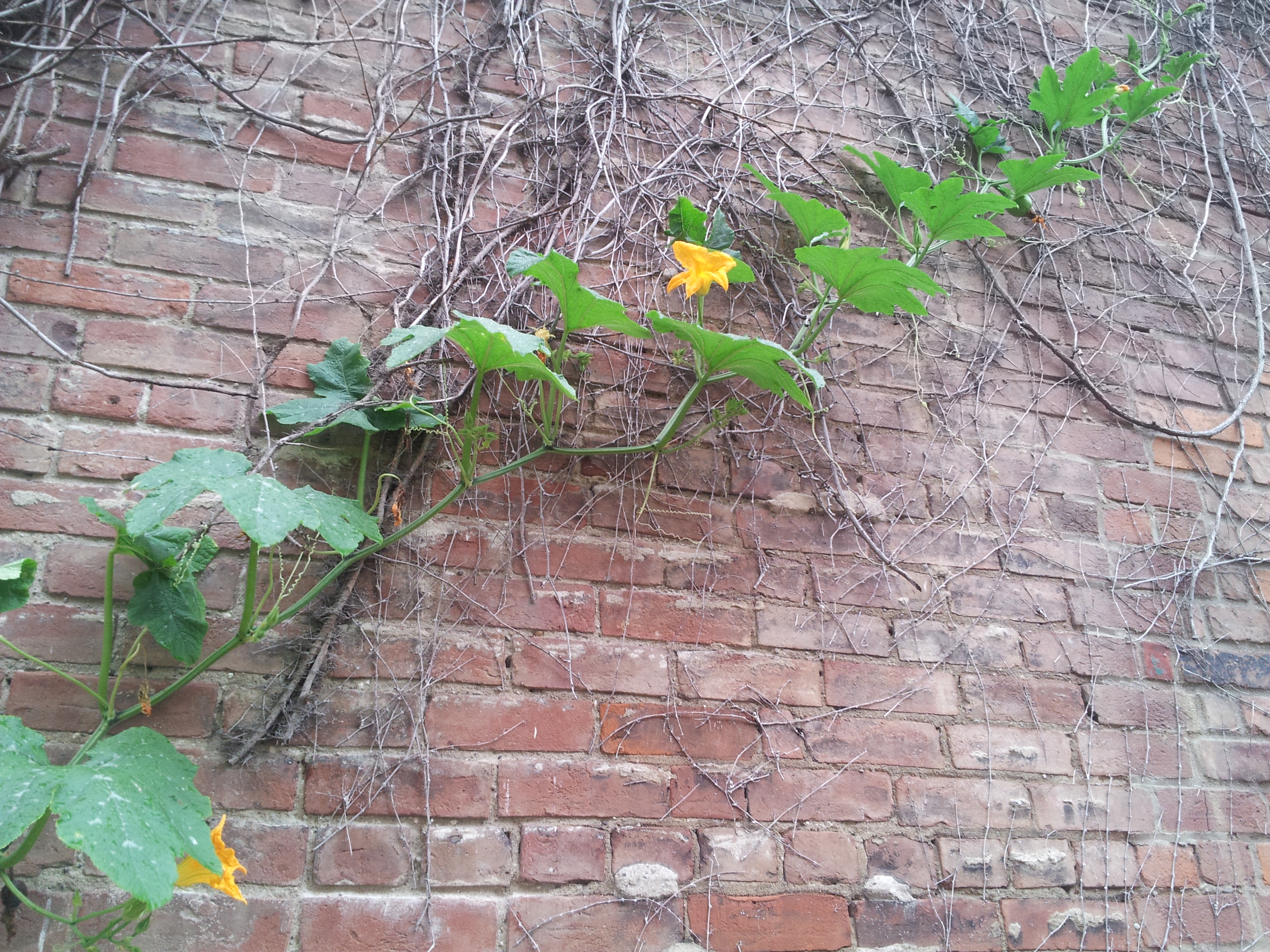 Pumpkins defy logic in that they are so big that it’s hard to imagine them hanging from fences; but these squash in fact are Super Climbers who seem to love growing vertically. 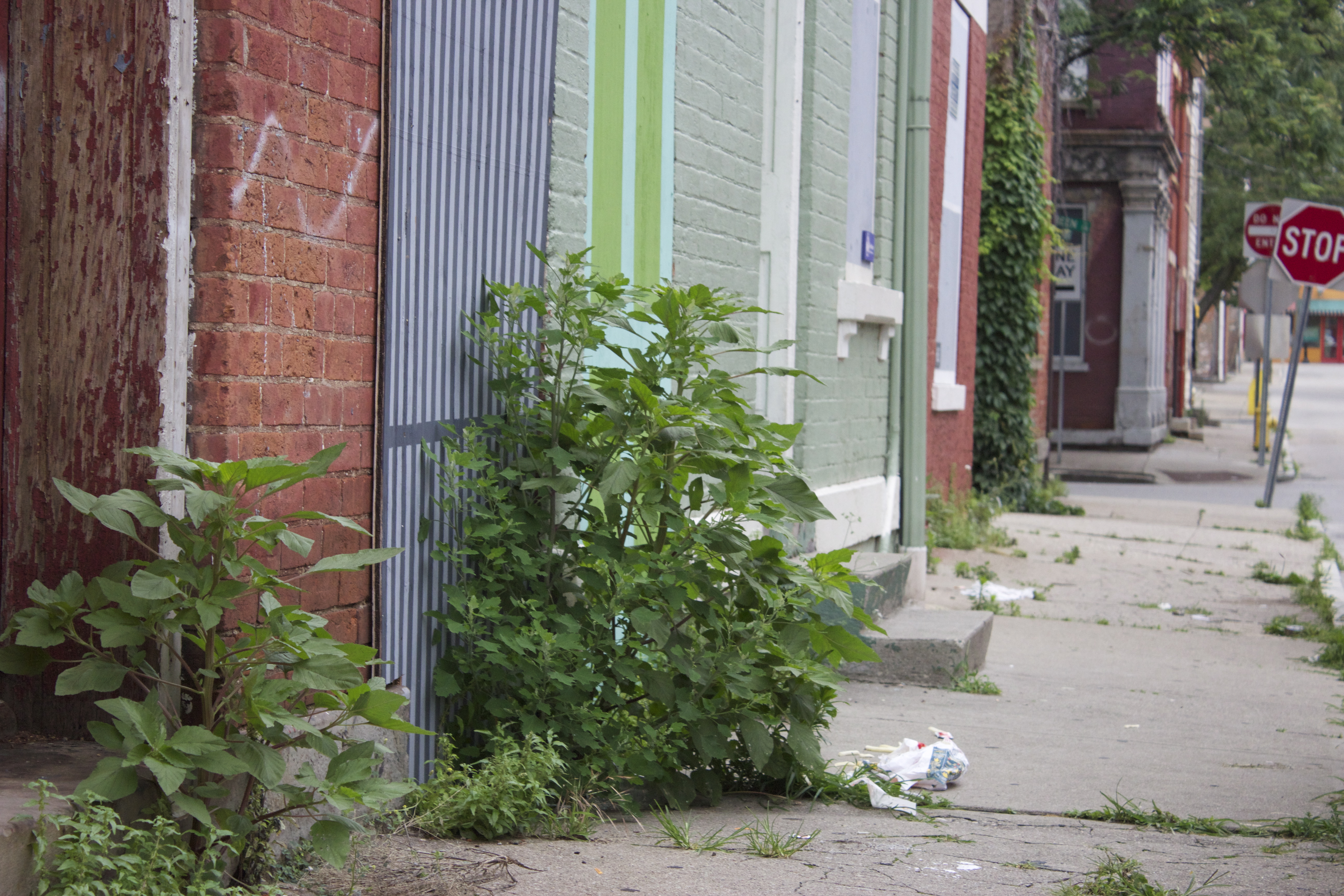 There are weeds growing out of every crack in the sidewalks and at the base of all of the houses in OTR on Pleasant St.  We have labored many hours pulling these weeds and tried many approaches to fighting them en masse to no avail.  One Person can not pull them all.  Most people rent their places in Over The Rhine so it is not there job to weed in front; other buildings have been abandoned a long time ago.

We have tried to pull them, we even tried to Burn Them using a torch attached to a propane tank designed for this.  Burning worked to kill the plants but then it left the plant in the street standing but now dead and brown instead of green.  This worked to stop the plant but did not make the street look good.  Instead the street had dead weeds growing out of every crack in the street which still needed to be pulled.

Does anyone have Real Success with Vinegar?  Or have tried sodium solutions?

Does anyone have any Real Success with an organic product that I can apply to several blocks without contaminating the water supply and:

Is Safe for animals that may try to eat the plant while it is applied,

Will break down quickly,

Will not harm the applicator,

Will not harm anyone who touches it (urban area).

We would like to know.  Please use the comment section below declare your best organic method to kill weeds.
In the Mean time we have to round up a bunch of folks and pull them out.  If we can get about 7 people we can pull them all up in about an hour or two.
Are You In?

There is a little nature preserve in the middle of Avon Woods ; growing up in St. Bernard whole groups of us would walk up Rose Hill, “up to where the mansions are”.  When you get up there far enough there is a steep hill in the road that you would only go up if you knew that just off the sidewalk there is a stairwell that leads down into Avon Woods and connects to the nature preserve.  A beautiful stair case goes down the creek slope wooded hill.  One which would be too muddy to climb down for not the poured concrete stairwell.

View St. Bernard to Avon Woods. in a larger map 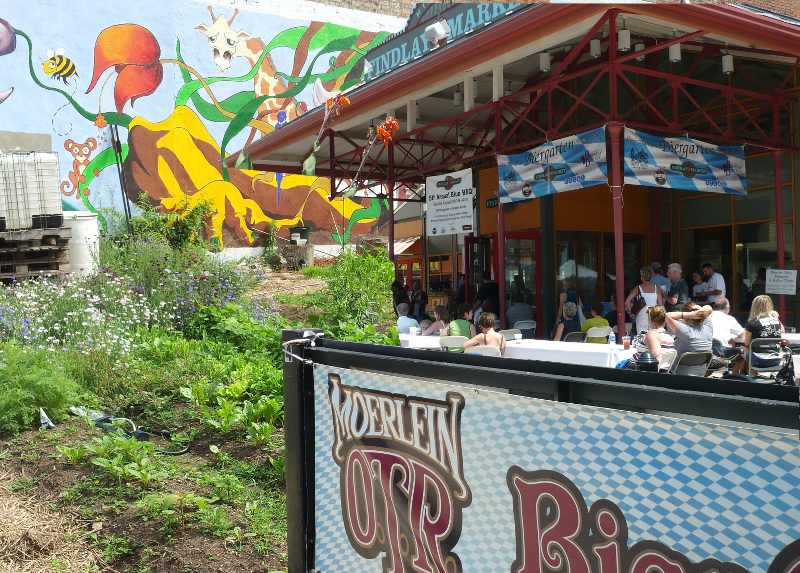 Start your Saturday with friends in a calm green garden in your city.  The OTR Homegrown Garden is on Pleasant St. a block from Findlay Market.

You know what that means?  Saturday Market at The Christian Moerlien Beirgarten is only a block away!

Start Your day gardening or Chilaxing on the garden Benches enjoying the calm of a city park.  Those who want to help we always enjoy people taking some time to themselves in Zen like states playing in the dire; AKA Pulling Weeds, Planting Seeds.   We have a big project going on this Saturday where we are moving a truckload of leaf mulch into the garden to add to the soil.  Bring a change of clothes and Gloves.

Then walk with friends a block North to the Findlay Market Christian Moerlien Beirgarten for drinks, music, and …….CornHole.   (Buy YOB and food)

Or, Helpers who grow food in the community can wear garden clothes with pride as you sip Christian Moerlien at Findlay Market.

Be sure to bring clothes for gardening that you do not mind getting dirty, a hat, and water, and gloves.

Volunteer to help in OTR at the Race Street Garden.

This Saturday, June 29, from 9:00am to 2:00pm The Race Street Garden is installing garden beds and grading the garden area with your help.

They are in need of around 18 volunteers to help wheelborrow and shovel loads of soil and compost into beds around the garden area.

The garden is located at:

Have Tools? They can definitely use these tools: 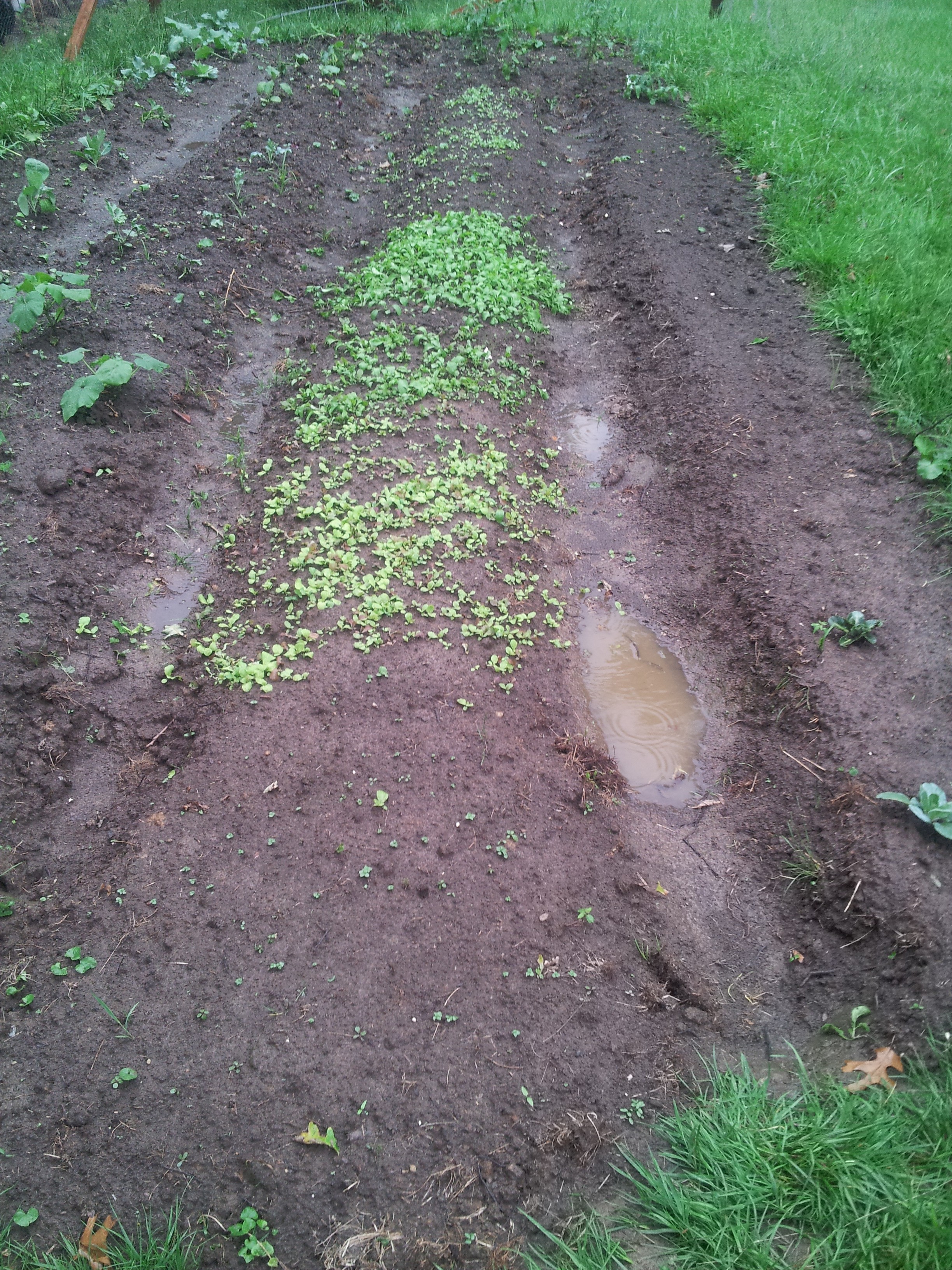 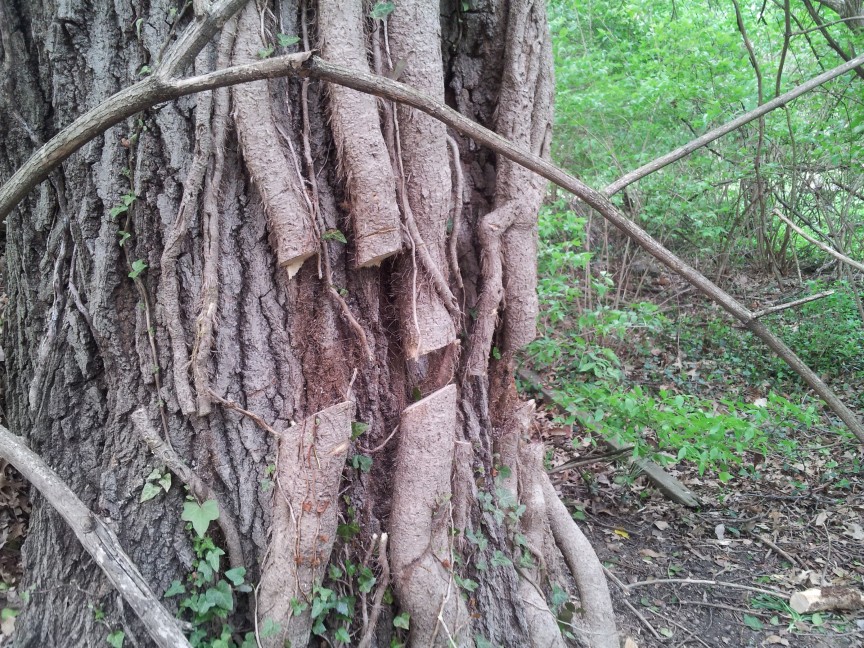 In Cincinnati we have an ivy that grows up the trunks of trees and into the canopy of trees.  If left unchecked these vines will take over the tree and kill the tree.

What is this vine called?

There are some of us who are in an active fight against these vines using a saw and hammer. 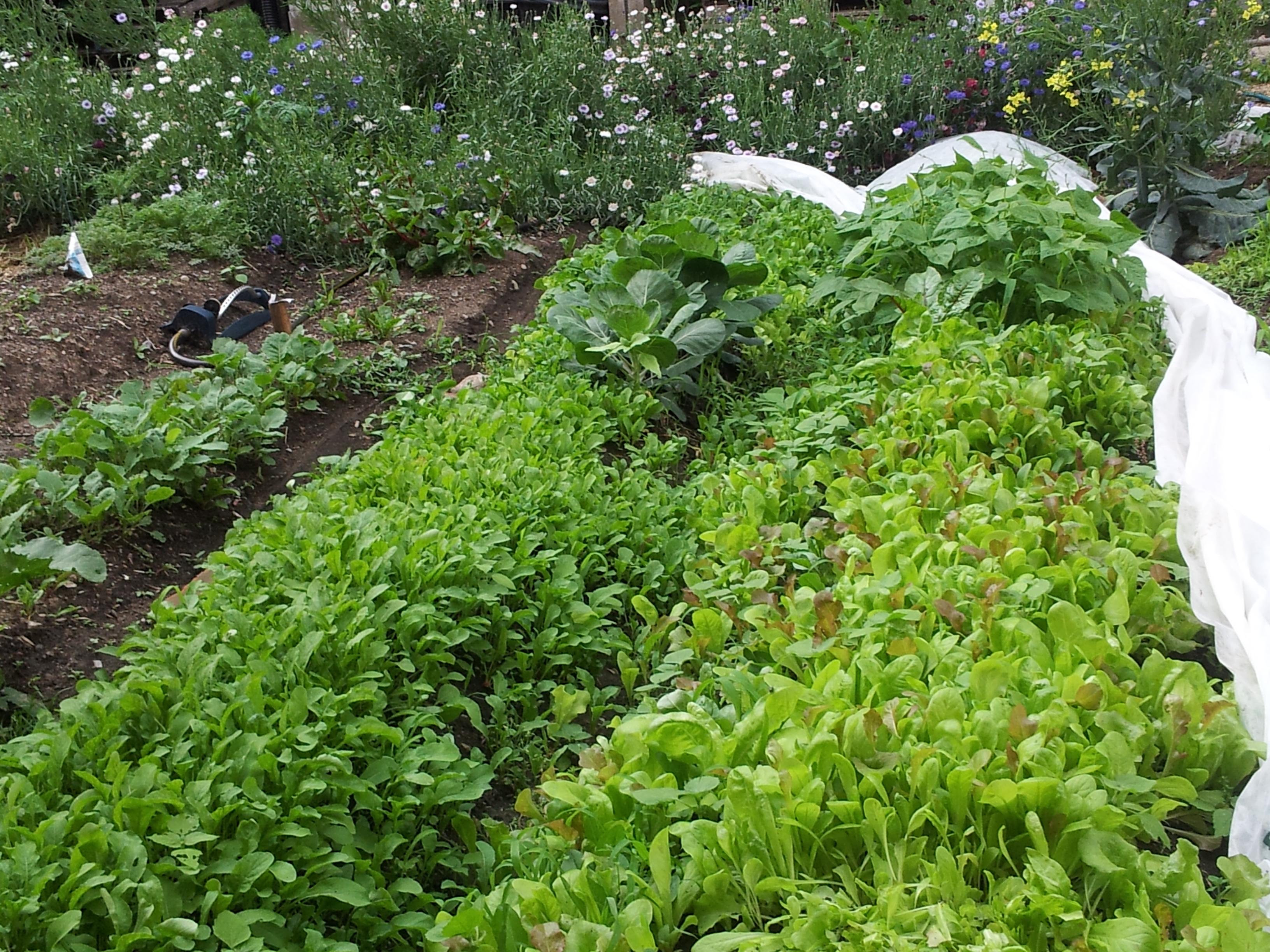 Growing Rainbow Chard to Seed in A Cincinnati Urban Garden

Monday, May 30, 2011  Beginning
The Chard grew thru the 2011 summer season, we were able to cut several harvests.
2  15 foot patches were allowed to live to bolt.  My philosophy to seeding plants is that every plant will go to seed, I let it grow and watch as it does its thing.  Patience and observation.  I got lucky with the Chard and Kale.

The Winter of 2011 – 2012 was very mild in Cincinnati.  Normally green leafy plants die in the frost of the winter s.  But several of our leafy lettuces survived that winter and began growing rapidly in the 2012 Spring.

The mild winter of 2011-2012 enabled the Chard and Kale to survive outdoors through the 2011 Cincinnati Winter.
Tuesday, April 10, 2012 Chard Made it through the Winter. (Scat Cat!!!)
This is an image of the plants that lived through the mild winter as seen in spring of the 2012.
Saturday, May 19, 2012
Rainbow Chard got us in trouble with the non-initiated folks in the City who are not used to seeing plants go to seed.  We have to erect a sign, “We are Seed to Seed farmers.  Some of every crop of every planting is allowed to grow so that we can harvest the seeds to plant them again.  I think a lot of people saw overgrown plants and though neglect.  But I can not worry about that.

As the heat of spring progressed the plants bolted and ran.

They grew vertical stocks as shown above, the stocks sprouted pollen sacks and then blooms on the same plants if I remember correctly.

By late Spring this all fell back and small granola like seeds formed, very small at first but they grew on the stocks in number and in size.  I checked on their size, color, dryness, and hardness each week until they were dark, dry, hard, brown, and fell right off.  I could now obviously tell the seeds were done, the plant was telling me as seeds covered the plants and even began to fall to the ground.

I could take my hand and run my fingers down a stalk and the seeds would fill my hands.  The seeds fell off in droves as I collected droves, thousands.  From six plants that seeded I got more than I can take.

Still Missing The Harvest Shots.  These Girls Get Bushy and Huge!  Here are shots throughout three years of The Rainbow Chard Cycle.